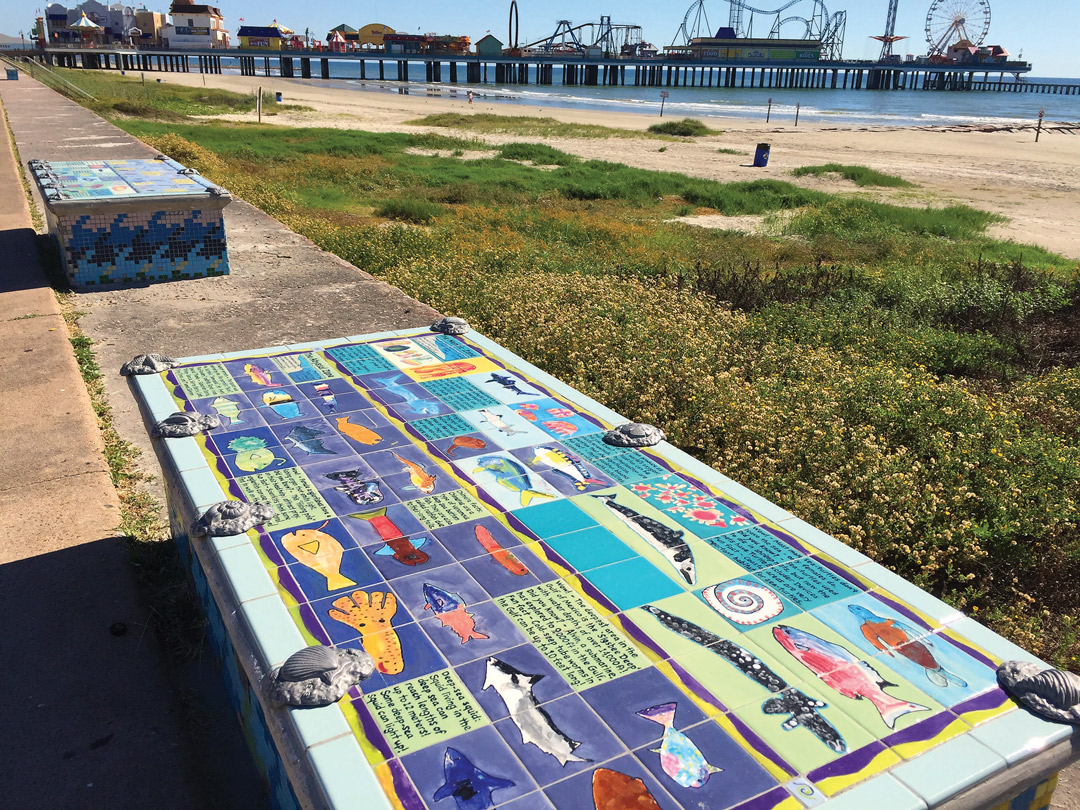 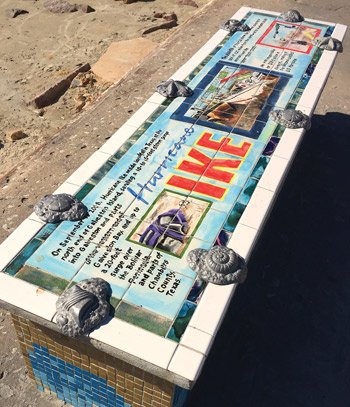 At 10.3 miles long, the pavement atop the Galveston Seawall is said to be the longest continuous sidewalk in the United States. It provides a great place to walk, jog, skate, cycle or pedal one of the ubiquitous surreys. With all that leg power being expended, planners included plenty of benches along the way for people to take a break while counting the waves rolling in or watch the people pass by.

When the executive director of Artist Boat looked at the benches, however, she saw an opportunity to create an eye-catching public education project. Karla Klay founded the non-profit organization in 2003 to combine her passions for art (she earned a Bachelor’s of Fine Arts from Southern Methodist University) and the coastal environment (she earned a Bachelor’s of Science in Marine Biology from Texas A&M University). 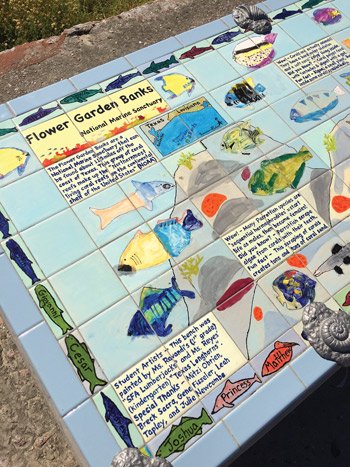 Artist Boat began with two staff members, a $65,000 budget and a mission to promote awareness and preservation of the coastal marine environment by combining science and art programs with kayak adventures. It has grown to over a dozen staff members, an annual budget in excess of a half million dollars and a slate of programs serving schools and the public. The organization is also spearheading efforts to create a bayside coastal heritage preserve.

So it was only natural that Klay saw a blank canvas where she might artistically spread her ecology message to more people while they enjoy the seaside. Artist Boat had already completed some tile mosaic projects with area schools, so Klay knew that tiles were a medium that would work well to adorn what were essentially 63 cement boxes.  “They were just ugly benches,” recalled Amanda Rhinehart, education program director for Artist Boat. “Some were painted previously, but paint doesn’t hold up well in the sea salt environment.” 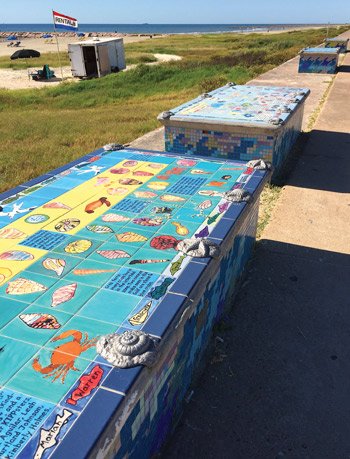 Klay pitched her beautification plans to city and county officials who granted approval to move forward with transforming the seats through Project S.I.T. (Seawall Interpretative Trail).

In the first round, Artist Boat’s Eco-Art Residency Program at the island’s Satori School and KIPP Coastal Village taught students about ocean literacy and Gulf ecosystems. The students then hand-painted ceramic tiles portraying those themes, and the tiles were then affixed to the first dozen benches.  Following that success, Artist Boat raised funds through private sponsors and opened the project up to local professional artists for another dozen benches. 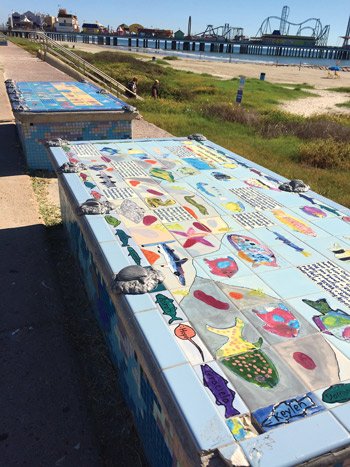 Artist Boat provides a template replicating the surface of the bench, and the artists design an informative piece of art based on such themes as Sargassum seaweed, zooplankton, red tide, recreational and commercial fisheries, hurricanes, shipping, coastal shells, marine mammals, and local beach history.

Designs selected by a jury of artists and marine experts are then painted onto the tiles. Once glazed and fired in the organization’s kiln, the finished tiles are affixed to benches by United Tile in Bacliff.  Additional benches will be completed as funds are raised from sponsors. For information about participating, visit www.artistboat.org/project-s-i-t.html.

There is also a possibility of funding through the City of Galveston’s Seawall Transit/pedestrian Access and Beautification Plan coordinated by The Goodman Corporation. The project includes additional benches for bus stops planned along the corridor.